Due to the architecture of the city, the buildings in Frankfurt seem to be very old, but the truth is that here it is hard to find at least one building, which was built more than 50 years ago.

The reason is that during the Second World War the city was almost completely destroyed. However, carefully restored, now the city pleases its guests with a harmonious combination of elegant mansions on the Museum embankment, and with numerous, very curious museums. The modern buildings of the banks’ district, shining in the evenings with thousands of lights on the other side of the river, would be kept in your memory for the rest of your life together with the unforgettable atmosphere of the entire city. In order to have maximum of admiration, it is better to rent a car in Frankfurt. Here are four most popular places to visit in Frankfurt.

This is, perhaps, the most pompous sight of the city. Despite the fact that it is not a mother church, the St. Bartholomew’s Imperial Cathedral, (this is its full name), is historically important and even sacred place for all Germans. After all, in its Gothic walls, from the year 1356, the German monarchs were elected and then crowned.

The construction of the cathedral began in the 13th century, but until this date, there were so many buildings on the site of the church that its foundation was multilayered. The land under the cathedral was once an island, the banks of which were simultaneously washed by two rivers. During 2500 years, the Celts were living here. In the era of the Roman Empire there was a chapel on the site of the church, then in the 6th century, it was rebuilt into the palace chapel of the Merovingian “long-haired kings” (6th century), then into the chapel of the Carolingians (8-9th centuries) and later, into the Basilica of the savior (9-13th centuries). In the 13th century, part of the basilica was rebuilt, a part was removed, and then the Emperor’s Cathedral of St. Bartholomew appeared, the one, which we could now see.

Alas, the modern construction of the cathedral is not the original. The temple was badly damaged by the fire in the 19th century, and during the Second World War, it was practically wiped off the face of the earth. Fortunately, ancient drawings and photographs were preserved, with the help of which, it was possible to restore the cathedral in its original form: with a red facade in the early Gothic style.

The rich decoration of the church and its interiors deserve special attention. For example, there is the “Lamentation of Christ” by Anthony van Dyke, as well as quaint Gothic murals with scenes from the life of the Virgin Mary, altars, sculptures, bas-reliefs and stained glass windows from different eras. 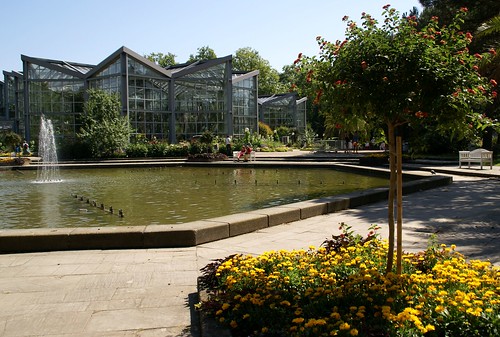 Located in the southeast of Frankfurt, this botanical garden is considered one of the best not only in Germany, but also in all of Europe, because in the territory of 22 hectares, the flora of practically all the world is collected. Two or three hours of walking here, would provide insights into the plant world of the Earth, better than any round-the-world trip. Deserts, prairies, mountain forests, steppes and humid jungles – it seems that there is a place for every eco-system in the Frankfurt Palm Garden. All year round, pineapples, mangoes, orchids, coconuts, mangroves, ferns and cactuses grow, blossom and spread the fragrant aroma. There are greenhouses on its territory, open-air gardens with trees and shrubs. There is a lake with bamboo thickets, which is so reminiscent of China.

Palmengarten was opened in 1868 thanks to Duke of Adolf Nassau. He lost all his lands in Prussia; therefore, he was forced to sell a collection of unique exotic plants. Fortunately, the joint stock company was immediately organized, and all this amazing botanical wealth moved to the city arboretum and to the ‘People’s House’ with a winter garden. It was planned that it would hold literary and musical evenings, dances and solemn events, that all kinds of sections for the fun-filled leisure of local residents would be opened.

Almost all the year round, the flowerbeds of the Palm Garden are full of flowers. In addition to garden beds under the open sky, fragile and rare flowers are having a separate pavilion – Bluetenhaus. On the territory of 200 square meters, there are cold and warm zone, where grow camellias, azaleas, orchids and all kinds of tropical flowers. Be sure to check the Tropicarium – a huge greenhouse made of 14 glass pavilions. The height of each pavilion is more than 18 m, so that the huge palms could grow free, without bending, and freely branching forth.

Families with children would like the butterfly pavilion, where more than a hundred species of these gentle creatures live. Flocks of multicolored insects freely flit through three rooms, sitting down on visitors, eating apple and orange slices. 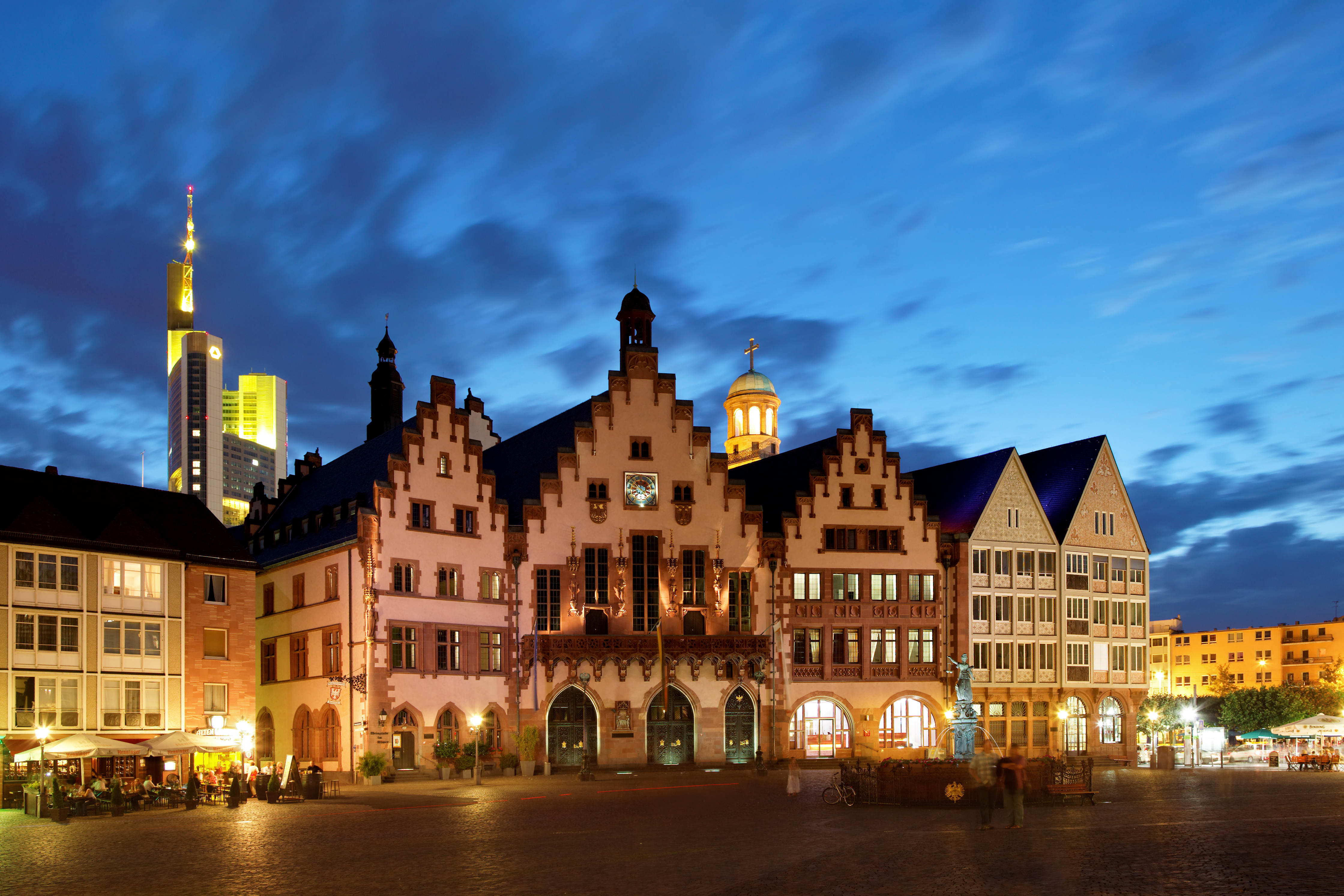 It considered the most recognizable place in Frankfurt. Its architectural landscape is put on postcards, magnets, T-shirts and other souvenirs. The square received its name from the old Frankfurt City Hall of Römer (from German “Römer” means “Roman”), which is more than 600 year-old. When you are looking at this city hall, it seems that this is not just one, but three separate buildings, which they are. They were bought out by the city government on March 11, 1405, so that later the political center of Frankfurt – a complex of buildings of the treasury, the registry office and the town hall would begin to operate here. However, the top place on Römer, of course, is occupied by the Town Hall, which facade is a true work of art. Decorated with statues of the great emperors (Ludwig II, Maximillian II and Charles IV), it seems to produce even more stunning impression from the inside. There is a large Imperial Hall and a room for the election of the emperor, which were scrupulously restored after the Second World War, the frescoes, emblems, and other details of the décor, which are far from the ordinary.

In addition to the town hall, the surrounding houses are also worth exploring- they were all built in the 14th and 15th centuries in the Gothic style. Alas, after the Second World War, the buildings were destroyed, but then they were carefully restored.

Pompous, as a palace, and magnificent, as a wedding cake, building of the Old Opera could be called a symbol of Frankfurt am Main. The history of this place is extremely rich and exciting: after almost 60 years of work, it lay in ruins for three decades, to be reopened in 101 years and to appear before the eyes of the discerning audience, craving after spectacles.

The opening of the Old Opera of Frankfurt in 1880 was extremely solemn and even the Kaiser Wilhelm II attended it. Built in the style of neo-Renaissance, with a double pediment, which is reminiscent of Greek porticoes, the Opera has become a real adornment of the city. Alas, it was badly damaged during World War II. After the war and until the late 1970s, it was just “the most beautiful ruins of the city”, as they were called by the Frankfurt locals.

In 1981, the work was completed, thanks to which, the facade and the hall returned their historical appearance. The two halls and all technical rooms, which are located inside, became ultra-modern and highly equipped.

The building of the new Old Opera is having two beautiful halls at once. The main, large hall, decorated in mahogany, is famous for its excellent acoustics. The second hall is called “Small” (or “Mozart’s Hall”). Almost every day, the concerts by well-known soloists and music groups from all over Europe are performed at it.

In front of the building of the musical theater, an elegant fountain was created, constructed according to all the canons of classicism. Refreshing in the summer noon with barely reaching splashes, and creating an amazing ensemble, together with the building of the Old Opera, it has become a favorite meeting place for all residents of Frankfurt.