Creating a look that lasts is difficult, but creating an on-screen look that is timeless is even harder. From sci-fi to crime, every genre has had its influence on the way we dress. Menswear trends have lived and died as a result of movie magic. To explore how fashion in the films we love has influenced everyday trends, Noose & Monkey – retailer of cutting-edge prom suits – take us through the greatest and best looks.

The Godfather is a modern epic and a timeless classic. Al Pacino’s leading role as Michael Corleone sees a young man transformed into one of the coolest gangsters to ever grace the screen – and his dress sense reflects this.

To distance himself from the mob he was born into, the protagonist’s clothes symbolise his personal distance from the family. As he progresses in his position within the criminal underworld, Michael begins to clothe himself in dark, expensive three piece suits that signify power. Michael (and his father Vito) also wear long double-breasted wool overcoats and dark Homburg hats in the films, with clear mobster connotations. Even when he dresses down, Michael is generally wearing a button-down shirt, smart waistcoat and tailored trousers.

How to get the look: The clothes are one thing, but the attitude is the one thing that you really need. While you won’t get away with the outlandish thick pinstripes on show in some scenes, opting for a black three-piece suit and using a small amount of product to slick your hair down will give you access to a powerful look – like Michael Corleone, you’ll need to own it. Noose & Monkey have a range of prom suits that will make sure you look the part for any role that you’re playing.

Christian Bale as Patrick Bateman terrified audiences in this slash thriller! As a portrayal of a man obsessed with male grooming, this was a terrifying example of the ‘metrosexual’ movement that included ice packs, facial masks and exhaustive workout routines to enhance a man’s vanity.

Consisting of 80s exuberance – Bateman reeks of success and business-sense, with a sinister edge to match. His main style consists of pinstriped suits, collared shirts, suspenders and trousers with geometric patterned ties. He also dons a double-breasted jacket on a few occasions, showing true style.

How to define what is cool – The Great Escape

Now, we tell you why Steve McQueen is the king of cool. His fashion sense has long encapsulated American style. The leather bomber jacket worn by McQueen in The Great Escape has set a trend in worn-in workwear that persists to this day. A pair of khakis, jumper, service boots and his jacket were all it took to make Captain Virgil Hilts a modern day sensation. Even in later films like Bullitt, McQueen was still setting trends in turtlenecks and casual style.

Bringing the future and the past together – Blade Runner

As one of the most iconic films ever to be made, Blade Runner is a classic. Unlike other efforts in that genre, the costume designers avoided tropes like latex body suits and jumpsuits, instead opting for a mixture of punk, Japanese and 1940s styling to create a unique noir look.

The women in the film often take centre stage; with outlandish dresses, puffed out shoulders and modern fittings, they encapsulate the future of fashion. However, it’s Harrison Ford’s Deckard that shows men a thing or two about what and what not to wear. He sports a long trench coat over a modernist-patterned shirt and tie with tan trousers – kindling a detective look. 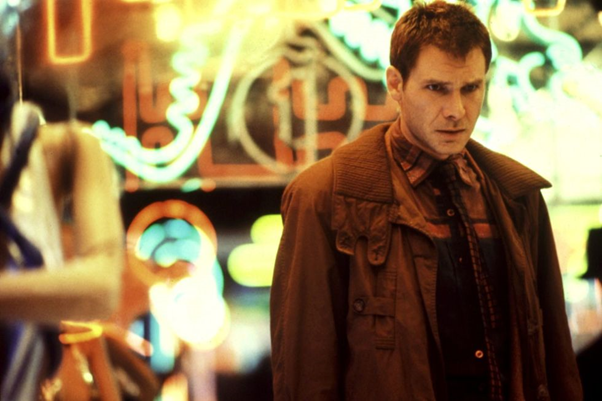 Business is business – There Will Be Blood

In There Will Be Blood, Daniel Day Lewis’ character defines the cut-throat nature of business, but he is also a man conscious of love, family, ambition and death. Daniel Plainview, portrayed by Daniel Day Lewis, is a man for whom success is everything – and he’s willing to do whatever it takes.

Without compromise, the oil-tycoon wears suits more often than any other character on screen. Styling a wool three piece over a simple white shirt and red tie, Plainview’s power is completed by a stiff-brimmed hat. He begins the film, however, in work garb as a prospector and then his subsequent outfits become more ‘professional’ until culminating in the iconic dark wool three piece with pocket watch and tan hat. Signifying power in style, Plainview wears tailored clothing in a time where few others could afford it. 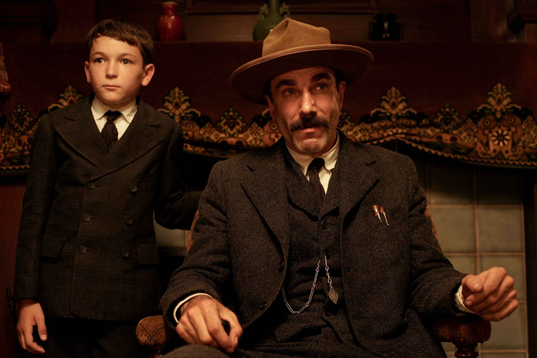